Lady Olga and her friend lady Kat wanted to punish this guy for lying to them. They went to his house but he escaped. They remained with his prized possessions which were expensive model houses. Instead of running after him, the mistresses decided to crush and destroy the model homes as punishment to him for what he had done. They used their high heel boots to crush them and within a few minutes, they had destroyed them all.

Mistress Christin likes to crush things with her shoes and high heels. But today she felt like doing it using her bare feet. So she took model cars and she used her bare feet to crush them. She did not care whether her feet would get hurt in the process. She destroyed them and surprised herself with how she was able to destroy them using her bare feet and not injure herself.

This mistress found out about crush fetish and she could not have enough of it. She had to try all the nasty things that were on her mind. She started with food crush before she went to her slave. She first of all forced him to eat all the food she had crushed with her boots before she used the same boots to crush her slave. It was a lot of fun for her. 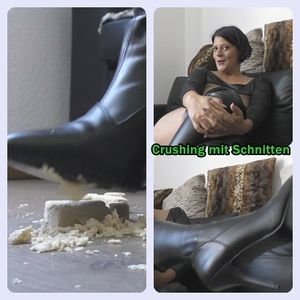 This mistress had crushed almost everything there was to crush. While she was holding flowers she had been sent by her boyfriend and wondering what else she could crush, her friend asked her to try crushing flowers. The mistresses threw the flowers down and descended on them using their high heels. It was not like the other things they crushed but they had fun all the same as they crushed the flowers.

Mistress Herrin Nicole was in a foul mood and the only way she was going to get out of it fine was if she found a way to release it. She decided to crush a can of soda to release her anger. She used her high heels to crush the can and within a couple of minutes, there was nothing left of the can but a crumpled mess which she threw in the bin.

Mistress Anica Red was taking a walk in her farm when she came across some colored eggs. She wondered which animal had produced them but since she had a crush fetish, she did not even wait to know which animal it was. She crushed them using her rubber boots. She created a mess but did not worry about it since it was at the farm and she did not have to clean up.

Lady Krasaviza and her crush passion

Lady Krasaviza was tired of crushing things and slaves. She wanted to try crushing other things besides these two. So she decided to go with food crush. She got an apple and she placed it on a metallic plate. She then used her high heels to crush it and destroy it. It was more fun that she thought it was going to be and she forced her slave to eat the mess that was created as a result.

Mistress Jenny bought some frozen yogurt and when she got home, she realized it was not the flavor she wanted. She was pissed and instead of taking it back and exchanging it with the one she wanted, she crushed it using her high heels. She dug her heel into it and destroyed it and created a mess. She forced her slave to lick it off the ground and he did.

Lady Laros wanted to crush her slave painfully. She made him hold her camera as she ordered him to lie down. She wanted him to capture as her foot landed on his face. She forced the guy to film as she used her feet to crush his face. She also did the same using her bare feet and both times it was as painful as she wanted it to be.